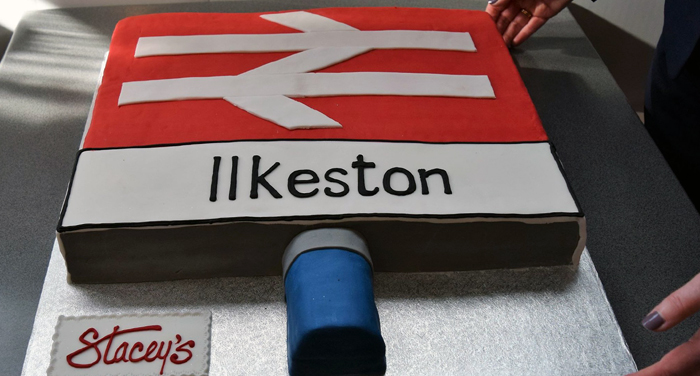 Jubilant celebration ensued on Sunday 2nd April as enthusiastic crowds lined platform 2 of Ilkeston’s new station to welcome the arrival of the first train in over 50 years.

Closed 2nd January 1967 due to rail expenditure cuts, the absence of the former station eventually resulted in Ilkeston being known as the largest town in England without a railway station.

The first train – the 09:44 Northern Class 158/0 BREL ‘Express Sprinter’ No. 158817, comprising DMU carriages – was greeted by cheers and applause at the £10m Aecom designed station, situated between Coronation Road and Millership Way, on the site of the former Ilkeston Junction and Cossall Station.

#Ilkeston was out in force yesterday to welcome the first train into the new station – hear our special feature after 8am on @erewashsound pic.twitter.com/NopYSRYLKV

PICTURES: Did you witness this little bit of history in #Ilkeston this morning… https://t.co/spmoO6SJJA pic.twitter.com/9IBZ3iC2Kf

Thank you @mthroup we had a great morning at the train station. pic.twitter.com/fsDj8DiOzy

Sareena Long of The Junction Cafe reflected on the opening day and what it meant for Ilkeston. She expressed her relief at the prospect of her business being well placed to attract passing trade from station users.

Because of previous station development delays she had worried her cafe would not survive unless she was able to get customers.

It seems the task of undoing the Beeching rail cuts has finally found favour. Some would argue that there were not only fewer trains, fewer brains behind the decision to close Ilkeston’s Junction and Cossall station after the demise of both Town, and North. Being deprived of its coal, iron, and textiles industries robbed the market town of its former importance.

Being deprived of its coal, iron, and textiles industries furthur robbed the market town of its former importance.

Ilkeston Rail Action Group first met in the John Warren pub in 1993 to discuss strategic lobbying to reinstate Ilkeston Junction. The privatisation of the railways between ’93 and ’96 undermined the previously well-run organisation of British Rail and resulted in a confused, corporate culture of poor decision-making and a changed order of priorities.

Ilkeston was once again robbed.

It was the Conservative government’s 2010 manifesto which included a renewed transport infrastructure policy to assist in social-economic mobility.

With the support of former Erewash MP Jessica Lee and a campaign by Ilkeston Advertiser, various funding channels were able to meet the cost of the development, including the government’s New Station Fund.

MP for Derbyshire Dales and former Minister of Transport Patrick McLoughlin’s too lent his support for Ilkeston station. His prediction of 120,000 passengers each

Setbacks and further obligations such as subsidence, flooding, wildlife, access, and a litany of logistical wranglings served only to slow progress and exasperate the local community.

Such was the significance of the station that even a former railway civil engineer software writer made a pilgrimage from East London to visit the “challenging” site as the ground was prepared for preliminary works.

The second development phase began in April 2016, with Galliford Try engineers working around the clock to stay within the £10 million budget and on time.

Britain Runs on Rail is an ad from the Rail Delivery Group to promote awareness of how money from fares and taxes is being invested and why.

The Railway Upgrade Plan is cited as being the “biggest programme of investment since the Victorian era”.

‘Britain Runs on Rail’ focuses on the ever more important role of the railway in national life, and telling customers and taxpayers how their money is being spent to help sustain further investment in our industry.