The famous Flying Scotsman flew through Ilkeston today bound for York from Ealing Broadway, London, and sighted by enthusiastic spectators with cameras all along the route.

The train departed London at 06:30 and made its way onto Midland Main Line at Cricklewood, stopping at St. Albans, Luton, Bedford and Kettering, to pick up further passengers.

They left the MML after Kettering and took the former Midland Railway Nottingham direct line, passing through Corby Station, before climbing to the Harringworth Viaduct. From the end of the viaduct, there was a long climb up to Wing Tunnel and then downhill to Manton Junction and through Rutland’s county town of Oakham.

The last stop to pick up passengers was at Melton Mowbray, continuing to Syston Junction and taking a sharp right to rejoin the MML from Leicester, travelling straight through Loughborough and joining the Erewash Valley Line at Trent Junction.

At 11:27 on June 29th, the steam train built for the London and North Eastern Railway thundered by a busy Ilkeston platform filled with people of all ages eager to see Britain’s pride of the railway.

Photo opportunities were a little more difficult than usual because the train was travelling at full speed, whereas it would normally be going slower because of the 11:30 to Leeds in front. This service was cancelled and gave a clear track ahead. 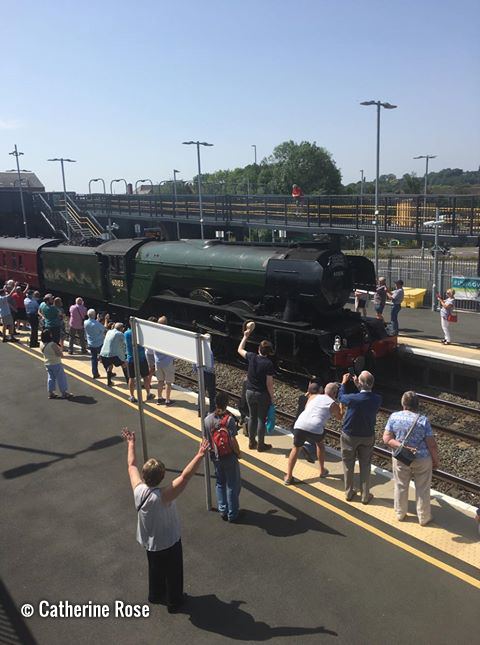 The train made its way back from York around 17:20, diesel hauled, stopping at the same stations to allow passengers to alight.

Historically, as an express passenger train service, the Scotsman operated between Edinburgh and London from 1862, but the LNER Class A3 4472 locomotive itself (initially numbered 1472) was designed by Sir Nigel Gresley and made in Doncaster in 1923.

Rail travel in 1948 Britain became nationalised under the newly-formed British Railways. Now numbered 60103, the Scotsman assumed many guises, painted war-time black, British Railways apple green, BR express blue, then BR Brunswick green until 1963, when it was retired. By the time it was taken out of service, it had been altered and improved several times.

After being purchased and sold several times, and toured at home and abroad including the USA and Australia, the locomotive was eventually overhauled and restored still in its classic green livery in a £4.2 million project.