The second phase of the Ilkeston station development began today as main works got underway with the arrival of contractors on site. Following the preliminary works of mine shaft investigation and the absence of Great Crested newts, the contract between Network Rail and Galliford Try has been signed.

A Derbyshire County County report from 23rd February 2016 estimates the station will be open in Autumn 2016.

After funding gaps appeared in an analysis report, the County Council contributed an additional sum, increasing their total capital expenditure from £2.264 million in 2015 to £3.077 million in March 2016.

Scrutiny of the plans revealed the targets were “not achievable.”

Because delivering the station project within Network Rail’s original estimated cost seemed unlikely, Derbyshire County Council might have withdrawn from the project altogether. Since the costs incurred to date are in no way recoverable, the consequences of abandoning the developments were deemed too significant.

A confirmed but insufficient budget of £9.938m was represented by the following: Nottingham Housing Market Area – £1m

This was sufficient to cover the station’s Anticipated Final Cost (AFC) as calculated in July 2015, but furthur analysis and estimates by Network Rail placed the costs at £10.501 million.

The additional £800,000 that has been put forth by the County Council means less cash is available for other transport and highway expenditure, such as roads and structures maintenance, road safety schemes and minor traffic projects.

An agreement has been put in place so that the contractor, Galliford Try, will share in any costs exceeding their esitimate. They will also share in any savings. This “pain-gain” agreement is in the interests of both parties.

Engineers from Galliford Try were seen arriving this afternoon on Station Street to erect fencing around the site and establish the portable office compounds.

If you stop by the site this week and take a look you should see some activitynow that work is actually underway. It has been said that the only factor that could interupt work at this stage is severe weather.

Click the thumbnails below for larger views of the photos taken today: 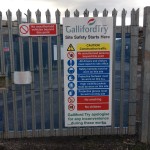