Ilkeston is included railway services are available from Network Rail’s electronic National Rail Timetable (eNRT) which is a long-term timetable for planners that covers services on the national rail network.

All timetables are split into routes, and so far there are two routes in which trains will stop at Ilkeston. Using the available timetable documents and route maps, it has been established that Ilkeston services (as of Febraury 2017) fall under tables 34 and 49, which correspond to East Midlands Trains and Northern Rail services.

The following information was taken from the Network Rail timetable page:

Timetables need to balance demand for trains serving small communities and non-stop fast trains as well as the requirements of businesses that rely on freight.

We take lots of factors into account when we plan a timetable, and many of these are to keep passengers safe:

East Midlands Trains and Northern Rail have yet to publish any public information for passengers but for now, the information below could be correct.

The appropriate PDF timetable and route map documents have been download and unzipped from Network Rail’s eNRT page since their webpage is often slow and unstable.

Nottingham to Leeds stopping at Ilkeston

Nottingham to Leeds stopping at Ilkeston 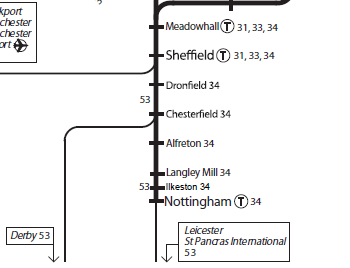 Norwich to Liverpool stopping at Ilkeston

Norwich to Liverpool stopping at Ilkeston 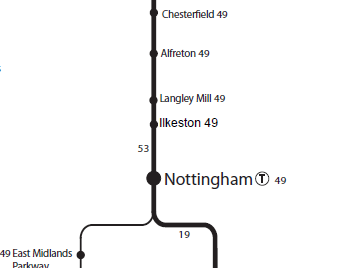